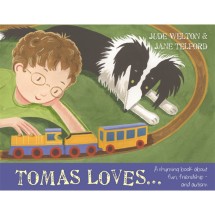 A book for younger children about an autistic boy called Tomas. Written by the same author who wrote previously reviewed books ‘Can I Tell You about Aspergers Syndrome?’, ‘What Did You Say, What Did You Mean?’ and ‘Adam’s Alternative Sport’s Day’.

This is a rhyming book with a ‘painted’ illustration style that tells a short story about Tomas, a young boy with autism, and what he likes, and doesn’t like. It also introduces Flynn, who I think is meant to be his service dog.

There’s not a whole lot you can say about a book like this. It’s well illustrated – the pictures are simple but engaging – and the rhyming story itself is pretty good. Of course, it’s only showing one specific autistic child but as part of a collection of books this would be well placed in a primary school classroom.

The book doesn’t focus on the negatives that are all too often discussed in autism, rather it just presents Tomas as being different and doing things in a different way. It also never outright states in the text that Tomas is autistic – which I think makes it a good book for the classrooms of Key Stage 1 children as a kind of potential introduction to the difference in autism.

Is it worth reading?

It might have some value for young siblings of autistic children, but I would say it’s main value would be in a primary school classroom where multiple children can read it. For school settings yes, perhaps not for others as much.

Is it value for money?

RRP is £9.99 which is pretty par for course for children’s books. I personally wouldn’t spend £10 on it for home because it’s aimed at a younger audience who may soon grow out of it. Schools would be better positioned to spend the £10 because then more children would have access to it.