Review: A History of Autism: Conversations with the Pioneers – Adam Feinstein 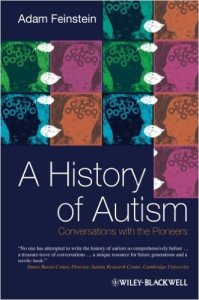 A recount of the history of the field of autism from when it was first recognised through to current day and a look at where research will move onto next.

This book is not going to be for everyone, but if you are interested in an indepth history of the field then this book is a great starting place. I found the book fascinating to read.

There are some ‘big names’ that almost everyone can associate with autism – such as Leo Kanner, Hans Aspergers, and Lorna Wing. Other names associated with autism, for better or worse include those such as Eric Shopler, Ivan Lovaas, Simon Baron Cohen, and Tony Attwood. This book goes beyond that and looks at the contributions from people and names that are rarely mentioned when talking about people who worked in the field of autism.

The book starts with a discussion on the contributions of Kanner and Asperger, who are credited with giving a name to the disorder. Despite the fact that both men were working at around the same time, identifying what we now call autistic spectrum disorders, there seems to be no correspondence between the two and there are even claims that Kanner had no idea of Aspergers’ work. As with all the people written about in this book, Feinstein remains objective in his writing. He uses the interviews he conducted of other people and the writings of people from the time to portray all the individuals he discusses as whole (and flawed) human beings. This gives a depth to the book that is often missed in these kinds of texts.

It then progresses through the 1950s and looks at the techniques and attitudes present there. There was good research started during this era, and Feinstein discusses such events as the first study on autism in twins, and the corresponding research into the etiology of autism. There is a large section dedicated to Jeanne Simons and her work with autistic children. Asides from all of this, there was one paragraph I found especially interesting:

Observations of unusual behaviour continued to accumulate. It is interesting that, as early as 1949, Bergman and Escalona were noting unusual responses to the sensory environment in children very similar to the ones Kanner described. More than 60 years later, the committee drawing up DSM-V is finally planning to include sensory abnormalities in the new definition of autism.

Moving onto the 60s, anyone who knows a bit about the history of autism knows that a big part of the 60s was the work by Bruno Bettelheim and his terrible theory on ‘Refrigerator Mothers’, and the worldwide impact his work had on the families of autistic people.

When Bruno Bettelheim’s 1967 book, ‘The empty fortress: Infantile autism and the birth of self’, which blamed the parents for their child’s autism became an acclaimed bestseller, there were worldwide repercussions: it was the first book about autism ever to be published in Spanish, for example, leading to years of misconceptions in Spain.

There is, in fact, an entire chapter pretty much concerning the massive impact Bettelheim’s book and theories had on the field of autism.

However, the 1960s also saw parents fighting back against the idea that aloof parenting was what caused autism, and investigated different groups of researchers and family members who teamed up to provide services for autistic people. This included the work of Lorna Wing and Sybil Elgar, and the establishment of the National Society for Autistic Children (now known as the National Autistic Society).

As it moves into the late 60s and 70s there is a discussion on the two opposing ‘teaching pioneers’, Eric Shopler and Ivan Lovaas who not only took very different stances on teaching autistic children, but couldn’t stand each other personally either. This chapter, of them all, is perhaps the most difficult to read and most of that is because Lovaas’s work (what has become ABA today) involved the use of reinforcers and aversives. The aversives included slapping, spanking and the use of cattle prods to electrocute the children.

Later chapters include how definition, diagnosis, and assessments have changed and developed over the years; and the theories and concepts that were developed throughout the 80s and 90s – both correct and incorrect. There is a chapter dedicated to discussing how the developing nations are working with autism – and it has to be said that some of this is not as positive as any of us would like it to be. The book ends with a chapter on the future which, among other things, discusses the MIND institute and their research on brain scanning and the neurodivergency movement and its impact on the field of autism.

As I said at the beginning, this book isn’t for everyone. It isn’t going to teach you or advise you on how to work with or help teach an autistic person. The one thing I believe this book is missing is more interviews with autistic people. There are inclusions from Temple Grandin, Donna Williams and Ros Blackburn – and mentions of others, but I believe a chapter dedicated to the interviews with autistic people would have benefited this book. This is a fact acknowledged by the author, so maybe a future edition will include such a chapter. 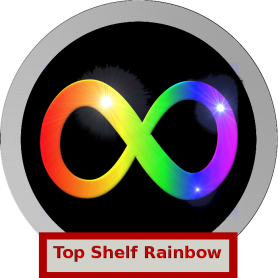 A comprehensive time-line with details and discussions with people involved of the history of autism. Since I read this book ‘Neurotribes’ and ‘In a Different Key’ have both come out, though I must confess to not managing to get through either of them so don’t know how they stack up. I enjoyed reading about the history of the diagnosis and the views of autism from different countries around the world, as well as being a history it helped me to understand some of the cultural and social components which effected perception of autism. A Top Shelf Sparkly Rainbow book rating from me.